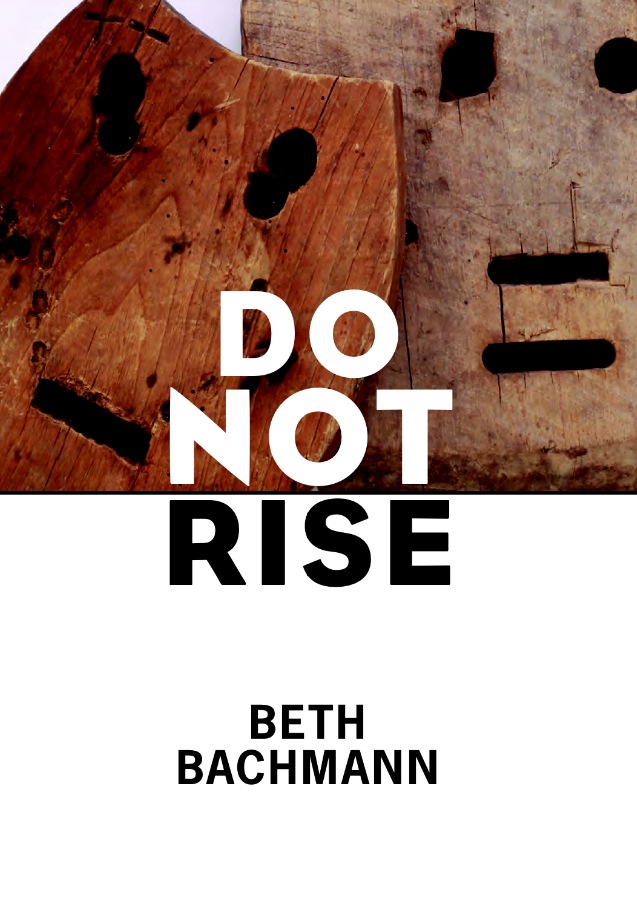 “Beth Bachmann’s Temper was the last time [in forty years] I remember reading a first book by a poet so prodigally and—the word that came to my mind was—severely gifted…The new poems in Do Not Rise are a quantum leap forward (with) all the metaphorical leaps, adumbrations, dizzyings, deft, brief knottings that make the poems in Temper so remarkable. I came to the poems before I had read Temper, and was dazzled. I didn’t know that she had, in effect, begun to walk the tightrope without a net under her…What they share with Temper is the unnerving poise and curiosity about the terrible things that we know…a remarkable young talent, and a scary one.” – Robert Hass

“As I read these poems, my heart tried to simultaneously climb into my throat and fall into my stomach, so instead of either, it just sat there throbbing.” – Jamaal May

“Fiercely distilled and haunted by the cruelties of war, Do Not Rise is compressed, imperative, disquieting and compassionate.” – Ed Hirsch

In “Poets with History and Poets without History,” Marina Tsvetaeva writes of the lyric poem, “The wave always returns, and always returns as a different wave.” Do Not Rise is a book about post-traumatic stress, memory, failure to forget, and repetition as an act of remembering in a state of war. Do Not Rise is an invocation to stand down, a dare to disobey, and a question of the terms of surrender.

The collection’s conceptual center—and its most insistent word—is “open.”  The poems have a stripped-down, investigatory drive.  Where the manuscript begins, everything “wants out,” and this outward pressure moves the work into a series of shifts, cuts, turns, magnetic pulls. Water on the tongue disappears into snow, snow gives way to a lake. It is as if we could witness the decomposition and refiguring of the world within the decomposition and refiguring of the line.   We feel the poems pushing against grammar and logic and into phenomena. Words and phrases break into “fire,” into “splinters,” into “fragments.” At times it is as if we are watching a chemical reaction reset to the rhythm of human perception.  The resulting gaps open the poem to a meaningful range of pauses, hesitations, delays, sonic mutations, reconsiderations.  A lapse of one thing makes possible another. A slowing down of time within the poem allows us to enter the folds of its thought. There is so much seeing in its listening.  ”The flaw is always / breaking away”   Always. . . away. Discoveries lie on the verge of departure.

“By the end of the poem, the “unknown soldier” is the very abstraction or anonymity of the poems, their violence and horror, but also the sexiness of them. The “I” is surely the speaker, claimed by the soldier, by this horror that has fragmented, traumatized, and warped her. But the I is also the I of the lyric in situations like this—claimed by her reader “you”—begging to be received. Thus, though this soldier demands to be named, he will not be named. To give particulars would fracture the very possibility of Bachamann’s lyric I. The violence is everywhere and the response, Bachmann shows us, is to be the “tireless fox” on the blooming battlefield. To explore, to eat what we want, hoping only that the experience be perhaps nourishing to someone else, like ice for an orchid.” – The Rumpus (click for full review)

“The author of but one other book of poetry, Temper (2009), Bachmann has already established herself as a powerful voice in contemporary poetics, one who writes like “a sibyl burning the leaves and smelling the smoke,” as poet Robert Hass has described her. While Temper addresses the unsolved murder of her sister, her second collection takes war as its central theme as she goes inside the heads of soldiers suffering from PTSD, explores unrestrained governmental surveillance, and mines traumatic memories. Bachmann crafts images of arresting serenity (“No snow on the road, only falling”), disconcerting severity (“Fingers / in the mouth make mud / into a poultice to warm / the dead”), and haunting intimacy (“Unknown soldier, you hardly say you love me but you love me like ice / the orchid takes slowly in its turning toward light”). With deeply resonant lyrics, strange grace, and unorthodox arrangement, Bachmann is in good company among poets such as Charlotte Boulay (Foxes on a Trampoline, 2014), Dana Goodyear (The Oracle of Hollywood Boulevard, 2013), and D. A. Powell (Useless Landscape, 2012).”– Booklist

“Bachmann marches language to the very edge: sometimes, it seems that meaning is about to give out; at other times, the significations proliferate so radically that one feels blinded. In these detonated moments, we are asked to build for ourselves, along architectures that either open us out to humanity or wall us off. In this sense, Bachmann forces the reader to choose among moral possibilities.” – The Collagist (click for full review)

“the speaker almost seems like a demi-god herself, not all-knowing but not quite human” – Chapter 16 (click for full review)

“What Bachmann shares with Fulton, however, is brilliance and ambition, and a need to turn unflinchingly to difficult subject matter. Like Fulton, Bachmann is concerned, in her own way, with putting language under pressure in order to articulate a Dickinsonian aftermath of great pain, of trauma.”– Los Angeles Review of Books (click for critical essay on Bachmann and Alice Fulton)

“Do Not Rise reads like a beautiful shuddering.  Bachmann’s poems shake in frustration towards the pain of war, and each pitch of grief can only help to herald the arrival of more pain, more loss, and more seeking.” – Post No Ills (click for full review)

“War saturates us. And if we are looking for opportunities to turn away from the real-life violence of oil fields and body bags, Bachmann reminds her readers that poetry—this poetry, at least—will not help us disengage.” SCOUT (click for full review)

“The collection explodes the primal places from which the urges toward war and desire both come, and lays bare the inevitable psychosis that springs from trying to reconcile the two.” Lynnel Edwards, Pleiades

“To open and to be open here is productive and devastating…Like Celan, both poets unlock and revitalize beauty in language that threatens the humane.” Beth Marzoni, Pleiades

Beth Bachmann teaches in the MFA program at Vanderbilt University and splits her time between Nashville and NYC.